This overview of the science necessary to understand groundwater issues is taken from Chapter 2 of the Washington State, Department of Ecology, Ground Water Resource Protection Handbook, Published December 1986.

The hydrologic cycle is a constant movement of water above, on, and below the earth's surface. It is a cycle that replenishes ground water supplies. It begins as water vaporizes into the atmosphere from vegetation, soil, lakes, rivers, snowfields and oceans-a process called evapotranspiration. 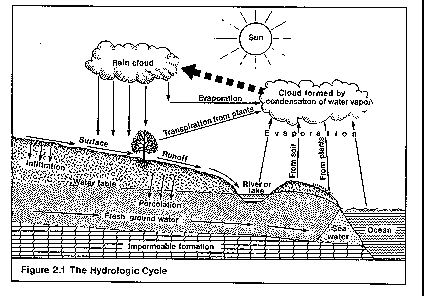 Surface runoff eventually reaches a stream or other surface water body where it is again evaporated into the atmosphere. Infiltration, however, moves under the force of gravity through the soil. If soils are dry, water is absorbed by the soil until it is thoroughly wetted. Then excess infiltration begins to move slowly downward to the water table. Once it reaches the water table, it is called ground water. Ground water continues to move downward and laterally through the subsurface. Eventually it discharges through hillside springs or seeps into streams, lakes, and the ocean where it is again evaporated to perpetuate the cycle

Most rock or soil near the earth's surface is composed of solids and voids. The voids are spaces between grains of sand, or cracks in dense rock. All water beneath the land surface occurs within such void spaces and is referred to as underground or subsurface water.

Subsurface water occurs in two different zones. One zone, located immediately beneath the land surface in most areas, contains both water and air in the voids. This zone is referred to as the unsaturated zone. Other names for the unsaturated zone are zone of aeration and vadose zone.

Water table is often misused as a synonym for ground water. However, the water table is actually the boundary between the unsaturated and saturated zones. It represents the upper surface of the ground water. Technically speaking, it is the level at which the hydraulic pressure is equal to atmospheric pressure. The water level found in unused wells is often the same level as the water table, as shown in Figure 2.2.

All geologic material beneath the earth's surface is either a potential aquifer or a confining bed. An aquifer is a saturated geologic formation that will yield a usable quantity of water to a well or spring. A confining bed is a geologic unit which is relatively impermeable and does not yield usable quantities of water. Confining beds, also referred to as aquitards, restrict the movement of ground water into and out of adjacent aquifers.

Windows are important for transmitting water between aquifers, particularly in glaciated areas such as the Puget Sound region. A window is an area where the confining bed is missing.

The water level in a confined aquifer does not rise and fall freely because it is bounded by the confining bed--like a lid. Being bounded causes the water to become pressurized. In some cases, the pressure in a confined aquifer is sufficient for a well to spout water several feet above the ground. Such wells are called flowing artesian wells. Confined aquifers are also sometimes called artesian aquifers. 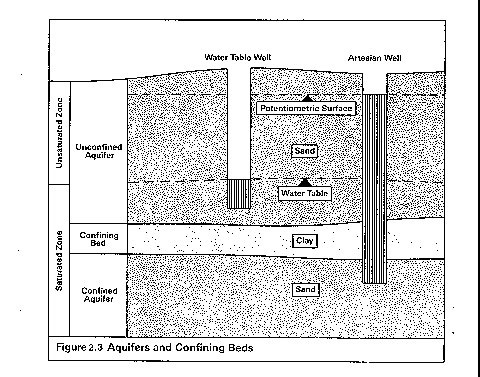 The most productive aquifers, whether confined or unconfined, are generally in sand and gravel deposits. These tend to have large void spaces for holding water. Rocks with large openings such as solution cavities or fractures can also be highly productive aquifers. Generally, the smaller the grain size or the less fracturing, the less water an aquifer will produce. This is because there are fewer void spaces for holding water.

Recharge is the process by which ground water is replenished. A recharge area is where water from precipitation is transmitted downward to an aquifer.

Most areas, unless composed of solid rock or covered by development, allow a certain percentage of total precipitation to reach the water table. However, in some areas more precipitation will infiltrate than in others. Areas which transmit the most precipitation are often referred to as "high" or "critical" recharge areas.

Discharge areas are the opposite of recharge areas. They are the locations at which ground water leaves the aquifer and flows to the surface. Ground water discharge occurs where the water table or potentiometric surface intersects the land surface. Where this happens, springs or seeps are found. Springs and seeps may flow into fresh water bodies, such as lakes or streams, or they may flow into saltwater bodies.

Gravity is the force that moves ground water which generally means it moves downward. However, ground water can also move upwards if the pressure in a deeper aquifer is higher than that of the aquifer above it. This often occurs where pressurized confined aquifers occur beneath unconfined aquifers.

As ground water flows downwards in an aquifer, its upper surface slopes in the direction of flow. This slope is known as the hydraulic gradient and is determined by measuring the water elevation in wells tapping the aquifer. For confined aquifers, the hydraulic gradient is the slope of the potentiometric surface. For unconfined aquifers, it is the slope of the water table.

The porosity of an aquifer also has a bearing on its ability to transmit water. Porosity is a measure of the amount of open space in an aquifer. Both clays and gravels typically have high porosities, while silts, sands, and mixtures of different grain sizes tend to have low porosities.

Ground water velocities are typically very slow, ranging from around a centimeter per day to almost a meter per day. However, some very rapid flow can occur in rock with solution cavities or in fractured rock. Very high flow rates (more than 15 m/day) are associated, for example, with some parts of the Columbia River basalt in eastern Washington.

How this relates to Leaking Sewers 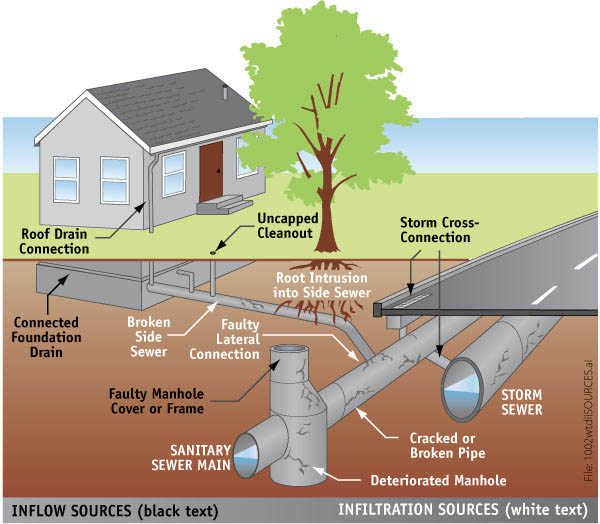